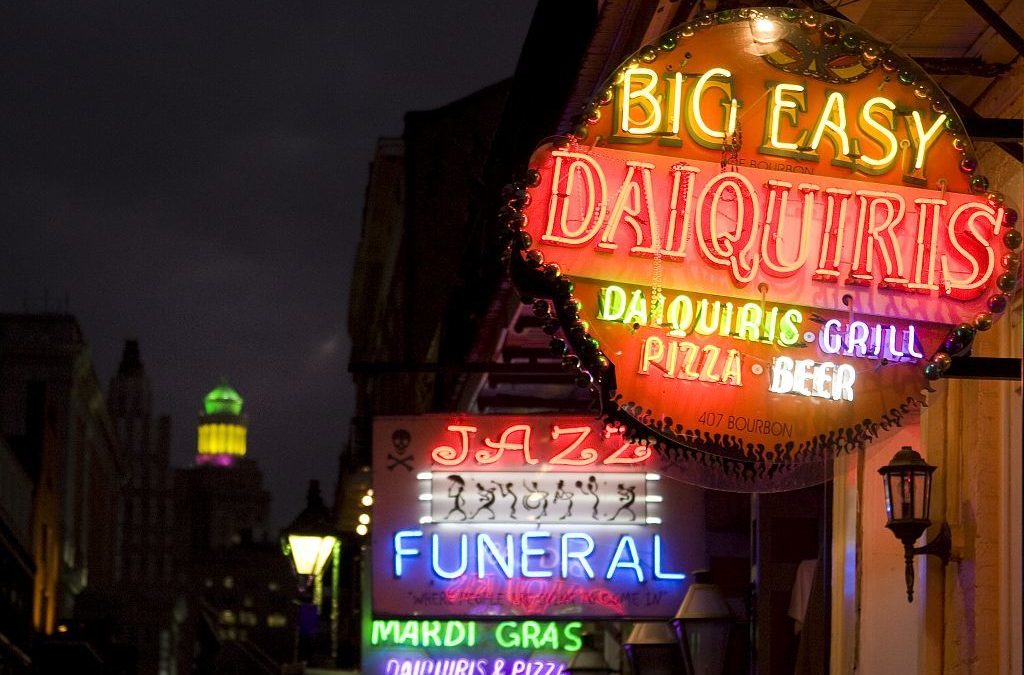 the valley’s lights
keep a planetary distance…there is

only the shallow
comfort of gestures left

like dropping
more ice in the gin knowing, as it melts,

that I will fail
to make you feel I understand: how

quickly that city
can collapse; how, as you walk

on the waterfront,
the buildings fall into piles

and how the beam
scanning them is not a lighthouse’s

but a cop’s flashlight
scattering shadows. It is in this split

second that you are
or are not saved. What’s strange is the indifference

I felt walking back through
the French Quarter, thinking of nothing, nothing

where cigarette butts float
in their dense constellations

Nothing I saw
that night could be deciphered, although

I knew the balconies’
black, twisted scripts must say something

about death—after all,
there were the flowers. And I remember

how a whore
behind the flowers seemed to wave, which made no sense

since we were neither
meeting nor leaving. I think her dark

arm moved like a branch—
simply because she was so uncertain.

If there are times
we can take comfort in denial, this was one:

I heard my steps
continue… And if there are times

a woman has no defense
but her own mind, you must have

denied, too,
for a while, what your body couldn’t.

Even though long after
the body healed, your mind would still remember

Waking covered
by his shadow, which was like not waking

at all. And I know,
sometimes, in this total terror

the mind is free
to imagine itself calmly above violence,

the way the raw
light of dawn hovered over you hours later.

of a row house
you remember, or the blue towels pressed

to your wounds,
but the others quickly glancing away

as if you were
a truer piéta. You must have known,

then, death
is just like women watching from the windows

before turning
away. There’s so little, finally, to say

about these events
which are and are not the same, except I’m afraid

of what you saw:
that compassion and words do not matter—

that what lasts
beyond them is the reality of workmen leaving

with black lunch boxes
at 5 am, as wives watch a few minutes

in the valley, as if
they had crossed some great distance, and yet

failed—like so many
planets, after burning through layers

of mystery, arriving
nearer us, but pale. Without orbit. Smaller

than we’d expected
as if, in the longer struggle of becoming accessible

to us, they were stilled.

Ann Snodgrass recieved degrees from the University of Iowa (B.A.), Johns Hopkins University (M.A.), and University of Utah (Ph.D.). She has taught literature, writing, and women’s studies courses at several universities both here and abroad. Her poetry, essays, and translations have appeared in dozens of journals, including: PARIS REVIEW; PARTISIAN REVIEW; NEW REPUBLIC; APR; POETRY; HARVARD REVIEW; NEW LETTERS; GRAND STREET & TRIQUARTERLY. She’s published two volumes of poetry (Portal & Fields Across Which No Birds Fly); a chapbook (NO DESCRIPTION OF THE WORLD); two volumes of translation from the Italian (The Hippopotamus & Three Stations); and a collection of critical essays (Knowing Noise). She’s received awards from the Academy of American Poets; Center for Book Arts; Chester H. Jones Foundation; the Fulbright Foundation; and the PEN American Center for her work.