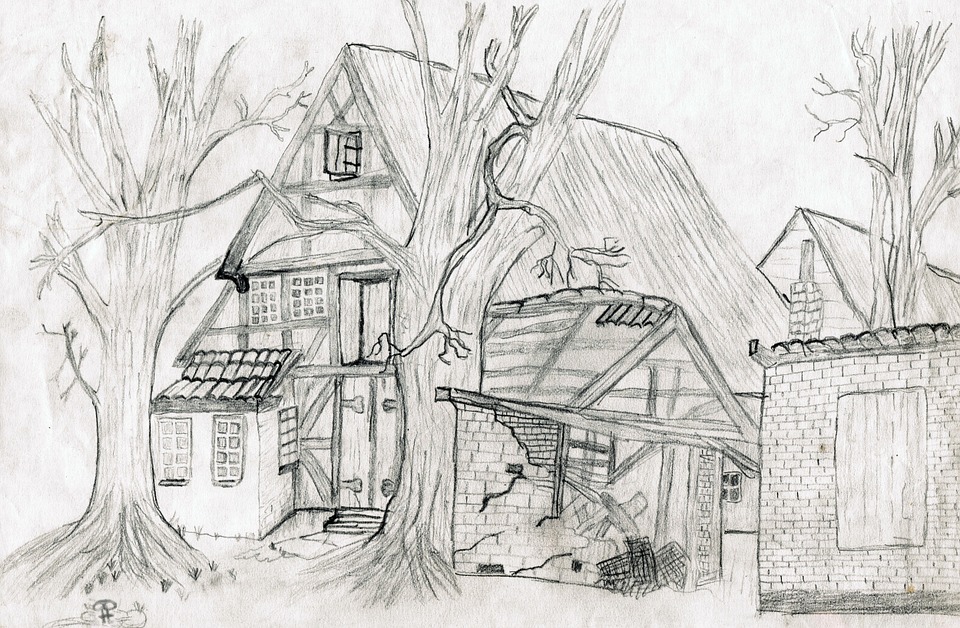 Here are the plans taped to the side of the old house, taped to the wall which will be the last to go. I have a hatchet for chopping; I have a radio for entertainment.

Last week they sent a man around with a questionnaire. One of the questions was: Why are you building a new house, what’s wrong with the old one. That’s two questions, I told him.

The children collect stones for the foundation; they come from all over. The stones, that is. The children come from the same place, which is mine. Which is, precisely speaking, inside of me.

I have a box with compartments for all of my tools. A deep pocket in my apron for nails, a canvas slot for the hammer. Soon I will have to pour in cement.

Even though it is midnight, the children are outside in their night-gowns watching me build our house. This will take a long time, I tell them, better go to bed. They are sitting under a tree, beech I think or elm, and they look cold. At least huddle together, I tell them.

When the man from the association came over with the questionnaire, he asked when I had planned to start work on the new house. When I get the money, I said. This was an answer he understood. We sat together and drank tea. He told me about his wife who is a cripple. She’s a very brave woman, he told me, a true saint.

There are people who say that building a house is too strenuous an activity for a woman. I would agree. My little wrists! My delicate spinal column! It takes the whole of my strength to stand this one board on end, and at the most difficult part of pushing, when the weight is the greatest and my own strength is diminishing, I lose all sensation. The landscape, whatever chink of it had been visible to me before, begins to blur, then blackens out altogether. The same thing happens with sounds: animal noises, breezes, cars, and radio music take cover beneath one tone neutralize, then silence. The last to go is the sensation of touch: I am pushing and pushing, and then I am not pushing.

The man whose wife is a cripple asked me if I was a woman’s libber. But I thought at first that he said ‘liver,’ and so I couldn’t understand the question. What what? I kept asking.

The children who are huddled together under the tree are worried. What will become of the old house? What about our toys? The tv? Our beds? Everything will tit, I tell them, don’t worry. I point to the plan that is taped to the side of the old house. Look, I say, here is the playroom, right here. And there are the bedrooms. For hours they watch me measure and saw. The cement which I have poured into the foundation is beginning to harden. Soon I will put up the walls.

The radio is playing one of my favorite Cole Porter tunes, Anything Goes. An instrumental version though, and since I know the words very well I sing them while nailing this wall in place: In olden days a glimpse of shockin’ was looked on as something shockin’ now heaven knows — anything goes! The children giggle and clap along.

This is the master bedroom, I told the man. So you live alone? he asked. Well of course not, I said, but I knew he was thinking about a man. There is no master? he said. Then he patted me very gently on the forehead, he brushed a piece of hair from my face. For thirty-one years I have been unable to make love to my wife, he told me.

When all four walls are up, the children walk around and knock on them. They kick them with their little feet. What if it falls down, then what? asks my son. It won’t fall down, I say, ever. But what if there’s a hurricane, an earthquake? There won’t be a hurricane or an earthquake.

The truth is, I haven’t thought about the roof until this very minute. I am thinking I would like it to be a soft roof, and so I to make a roof out of the children’s nightgowns. Take them off, I say. It is very cold now, so they rush inside. Then they come out with more nightgowns which we sew together and nail over the wall edges. What a beautiful house! I say. The moon is shining through the nightgowns. We all go inside and sit. Nothing will ever happen to us, I tell them.

Then the man took me in his arms and kissed my neck. His leg slid over mine, he pushed himself into me. Wait, I said, you haven’t seen the wedding pictures, the pictures of Switzerland! He pulled at my blouse, I was afraid it would rip. Please, I said, let me show you pictures of the children.

The children and I watch the moon shine through the nightgown roof. The only thing that could happen, I tell them, would be some-thing like this: We will be driving down route 121 at night, the moon will be just like this, not quite full, a little blurred around the edges. We will be driving into town to get pizza for dinner, a special treat. The road will stretch in front of us the same as ever, the white lines bending where the field starts, and we will follow the curve fast into the straight-away. And then a huge truck will come toward us slowly, its headlights shining in our eyes. It will cross to our lane and crash into us. Very simple. Very quick.

After a while the man pulled away from me on the bed. His eyes were sad. He started to cough. I have to get out of here, he said. I was relieved to see him go. Please, he told me at the door, abandon this idea of yours; stay where you are. I will, I will, I told him.

Karen Brennan Ph.D. is the author of seven books of varying genres including poetry collections Here on Earth (1989) and The Real Enough World (2006), both from Wesleyan University Press;  little dark (2014) Four Way Books; AWP Award-winning short fiction Wild Desire (1990), U Mass Press; The Garden in Which I Walk (2005), Fiction Collective 2; a memoir, Being with Rachel (2001) Norton, and new stories, Monsters, from Four Way Books (2016). A National Endowment of the Arts recipient, she is Professor Emerita at the University of Utah and teaches at the Warren Wilson MFA Program for Writers.