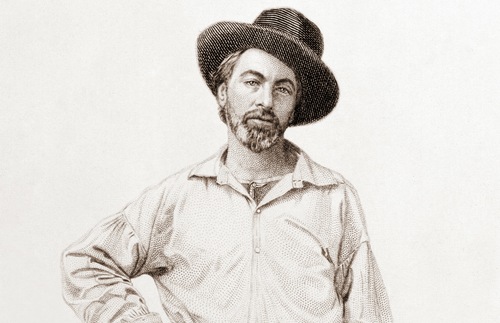 Our poetry consultant, Edgar Gabriel Silex, says: “Walt Whitman was a racist who called African Americans ‘baboons.’ White scholars attempt to dismiss his racism by claiming ‘everyone back then was racist.’ Here’s a note to all those who buy into that scholarly whitewash: John Brown, a Walt Whitman contemporary, wasn’t a racist, Harriet Beecher Stowe, a Walt Whitman contemporary writer, wasn’t a racist.” We agree with his point, which is only one of the reasons we like Matthew Graham’s poem about Whitman so much. For Graham, Whitman is the first step towards understanding the legitimate riot and rebellion to follow.

Are those clouds on the horizon? Smoke?
Birds in passage?

Early afternoon, March 1863, you walk the lower Bowery–
The tobacco, pickle and beery sawdust smells
Of the saloons, the crisp cedar of the cooper,
The peppery mercury of the hatter, the shouts of the vendors,
Junk men, fishmongers, the ripe noise of Yiddish,
Gaelic, Cantonese and the songs of the horsecars, the hackneys,
The drays and the dogcarts all beneath the electric roar
Of the elevated train.

What leads you to embrace this land, this city grown
Rich on war and sorrow and riots?
The mansions pop up like morels after a rain
Along Fifth Avenue; the tenements spread like typhoid
On Hester and Delancey.
This parable of a time defined by rags and cinders,
Plaster and lath, rusted tin, lace, brick,
Barrel staves and horse manure.
Manhattan faces and eyes forever for me.

A late snow salts your beard, collects
On your well-loved felt hat. Soon, the spring
Offensives in Nothern Virginia, Chancellorsville,
And the barges of wounded docked at the wharfs
At the foot of F Street in Washington, and you
Waiting for them at the Armory Square Hospital
On Independence and Seventh.

But today you walk head up, eyes wide, southeast
Crossing Front and turning on South Street
Through the chaos of commerce
To Coffee House Slip to admire the furled sails,
Patched and grey, of the slender schooners slipped there
Among the forest of masts and spars and bowsprits and shrouds,
And to admire as well as the Polish and Italian longshoremen
Some, even in this uneven weather, stripped to the waist
And shouting, above the steam engines and block and tackle
And enormous cargo nets, in the American language of their labor
That you so relish above all else.
City of the world!
City of the sea! City of hurried and glittering tides!

You still have your small house in Brooklyn
Where you read your poetry to your cats,
Thomas and Clara, who sleep in the sun
Of your kitchen window, and Solomon,
Your brother George’s horse whom you stable
In a barn down the road while he’s at the war.

Soon, though, soon the spring offensives and the boys
Will arrive with the lilacs and forsythia
That army of shadows in their muddy trousers
And clotted bandages and terrified eyes and the smell
Of the wilderness in their hair.
Soon the letters you will write to wives and mothers.
Soon the deathbed blessings, the confessions
Of 30,000 birds passing (the number of casualties at Chancellorsville),
The confessions of a nation still looking for a father
To absolve all our trespasses, our coveting,
Our broken, unrepairable promises.
To where the future, greater than all the past,
Is swiftly, surely preparing for you.

Matthew Graham is the author of the previous books of poetry, New World Architecture (Galileo Press, 1985), 1946 (Galileo Press, 1991), and A World Without End (River City Publishing, 2006), and The Geography of Home (Galileo Press, 2019). He is the recipient of awards and fellowships from the Academy of American Poets, Pushcart, the Indiana Arts Commission and the Vermont Studio Center. Graham is a Professor of English at the University of Southern Indiana in Evansville, Indiana, and is married to the painter Katie Waters.