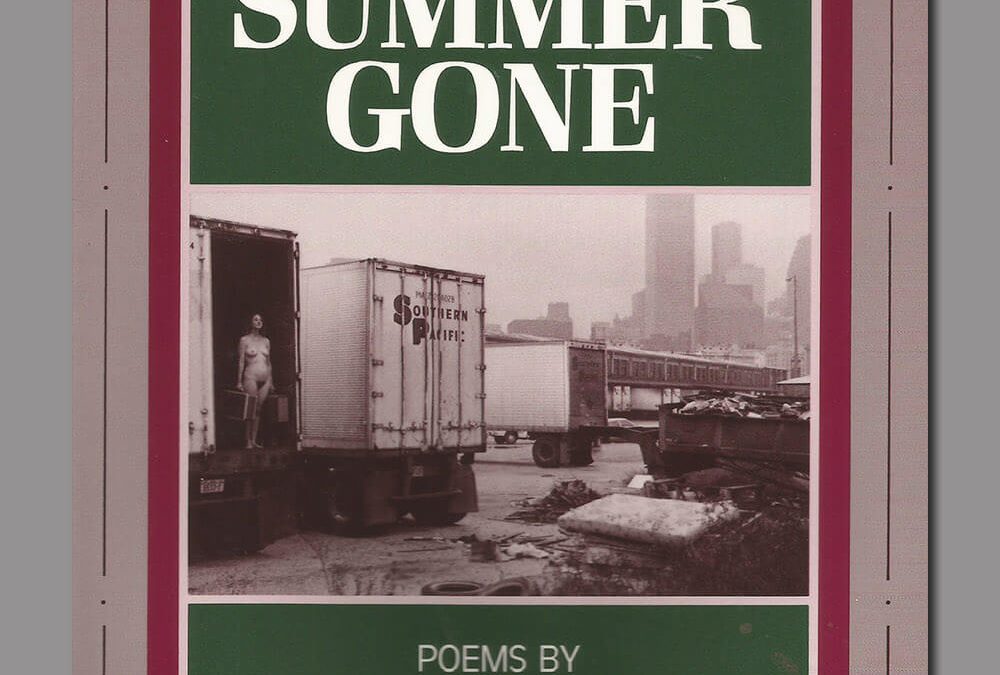 How can someone from half way across the world and growing up in a completely different culture assemble imagery in such a way that you understand completely what is being said? You have felt the same way and marvel at how they move you with their melancholy. But isn’t that the magic of poetry, to find a single voice that speaks for you? Joe Bolton in Days of Summer Gone is that poet for me. Sadly he died from suicide thirty years ago but I find every single poem in this collection moving. He makes me feel that I understand what he is writing about and his descriptions of landscape are so evocative that I can only wonder what he could have gone on to write had he lived.

The first poem in the collection is such a story in a poem that you are dragged into, wondering what other stories he is going to tell. In “Party” one of the many women who feature in his poetry, is there with him, whilst our narrator contemplates the party in the bottom flat of his apartment building.

One of my favourite poems is poem III “The Woman With the Blue Bandana” in “American Variations” which won the 1987 Guy Owen Prize. Here it is in its entirety:

“Just across the river from Indiana
Are a farm and a woman I once loved.
I wanted to go West, and the woman waved
Goodbye to me, from a field, with a blue bandana.

I made it as far as Texarkana,
Where, lonely every night, I remembered
How gold the fields of the farm got in September,
And how the woman let her hair loose from the blue bandana.

Just across the river from Indiana,
That farm’s fields have gone fallow since,
And the woman lies unmoving, unmoved, who once
Wiped clean the white bed of our love with her blue bandana.

Here also is V “At Equinox”

Far from the sea, a field
Of flowers makes a sort of sea;
And here in the city, far from fields,
The sky makes a field as blue as sea.

And, too, from time to time, a man
And a woman, agreeing, lie curled
To make what little love they can
In this, their one and only world.”

In virtually every single poem their are lines to fall in love with:

“And the bickering cries of the gathering starlings
Rise in praise of the falling dark.”

In many of the poems it is hard not to miss the underlying sadness that was Joe Bolton’s life. The past seems to have had such a hold on him. It was a much better place to be; the present was just disappointment. That of course the inevitable happened is no real surprise to the reader of these poems. Sometime in early 1990 he handed in his last collection of poetry, completing his Master of Fine Arts degree and soon after shot himself.
His nostalgia for the past is palpable in “Speaking of the South: 1961” and I am in total agreement that we really have lost something in the name of progress.
Here are the opening lines:

“John F. Kennedy is alive and loved, and the moon remains
Somewhat of a mystery, and suburbs and shopping malls

Here is another opening line that draws the reader in:

“And the dead-
What time are they due back?”

And the prophetic:
“The clock I can never think to wind
Ticks down like a bomb.”

So many of these poems are elegies and beautifully written – a recurring dream of his father’s, memories of Cadiz, Kentucky, a mediation (perhaps a family story) Symsonia, Kentucky 1914. Another favourite poem is “Study” of a woman remembering someone she loved. In the poem Bolton encapsulates what she has lost with the landscape surrounding her.
“She’d go there now, but the day is late.
It’s too far, that one block down to the river,
Where it must still be summer, even now.”

I was born in the Mater Hospital in Sydney and grew up on the Northern Beaches. I now live in Lake Macquarie and work in Newcastle. I have variously given birth to a son in South Wales, a daughter in New South Wales, run an internet dating agency, made dreamcatchers and tested telephone lines.
My poems and stories have been published here and overseas. Tomaree is my first published novel and my second novel Crossing Paths, inspired by BookCrossing, is up at Amazon. I have recently completed my manuscript Paris Next Week, the first book in a trilogy set in Sydney and Paris during the 1920s.
I blog on writing and researching historical fiction at WordPress and review regularly on Goodreads.