Mark Irwin: The Invention of the Snowman 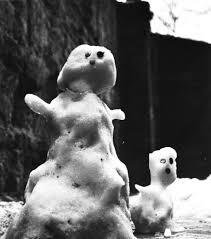 Somewhere beyond the bounds of sleep
my bones undressed, rising from their flesh
to become this selfless, falling dust.

It was then I wanted ears
with which to hear the familiar cries
of those children building me.

And of course I had no eyes
only this unfailing bandage of light,
the snow sewing its colorless view.

But worst of all, this thirst to be living–
to understand those small, clumsy hands
making the same careless mistakes as gods.

Mark Irwin is the author of nine collections of poetry, which include A Passion According to Green (2017), American Urn: Selected Poems (1987-2014), Large White House Speaking (2013), Tall If (2008), Bright Hunger (2004), White City (2000), Quick, Now, Always (1996), and Against the Meanwhile: Three Elegies (1988). He has also translated Philippe Denis’s Notebook of Shadows and Nichita Stanescu’s Ask the Circle to Forgive You: Selected Poems. His collection of essays, Monster: Distortion, Abstraction, and Originality in Contemporary American Poetry, was published  in 2017. His poetry and essays have appeared in many literary magazines including American Poetry Review, Agni Review, the Atlantic Monthly, Georgia Review, the Kenyon Review, Paris Review, Pleiades, Poetry magazine, the Nation, New England Review, New American Writing, the New Republic, and the Southern Review. Recognition for his work includes The Nation/Discovery Award, four Pushcart Prizes, two Colorado Book Awards, the James Wright Poetry Award, and fellowships from the National Endowment for the Arts, and the Fulbright, Lilly, and Wurlitzer Foundations. He is an associate professor in the PhD in Creative Writing & Literature Program at the University of Southern California and lives in Los Angeles and Colorado.