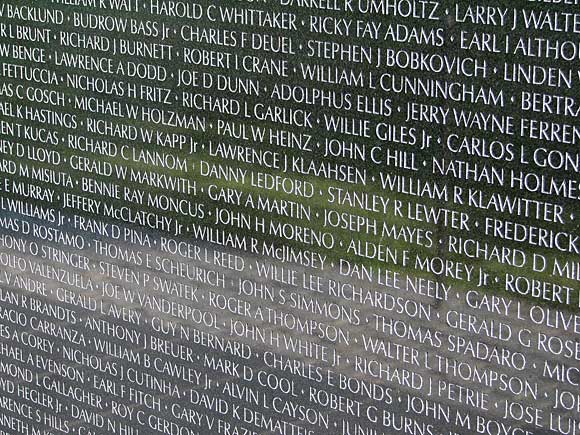 When we arrived at the camp they pulled us off the buses and made us do push-ups in the parking lot. The asphalt was hot and tar stuck to our noses. They made fun of our clothes and took them away from us. They shaved our heads until little white scars showed through, then filled our arms with boots and belts and helmets and punctured them with needles.

In the middle of the night they came to our barracks and walked up and down between us as we stood by our bunks. They looked at us. If we looked at them they said, “Why are you looking at me?” and made us do push-ups. If you didn’t act right they made your life sad.

They divided us into companies, platoons, and squads. In my squad were Wingfield and Parker and seven others. Parker was a wise guy, my friend. I never saw anything get him down except malaria. Wingfield, before the military took responsibility for him, had been kept alive somewhere in North Carolina. When he was in a condition to talk his voice oozed out of him thick and slow and sweet. His eyes when he had them open were the palest blue. Most of the time they were closed.

He often fell asleep while he polished his boots, and once when he was shaving. They ordered him to paint baseboards and he curled up in the corner and let the baseboards take care of themselves. They found him with his head resting on his outstretched arm, his mouth open; a string of paint had dried between the brush and the floor.

In the afternoons they showed us films: from these we learned how to maintain our keeps, how to protect our teeth from decay, how to treat foreigners, and how to sheath ourselves against boils, nervous disorders, madness, and finally the long night of the blind. The foreigners wore shiny suits and carried briefcases. They smiled as they directed our soldiers to their destinations. They would do the same for us if we could remember how to ask them questions. As we repeated the important phrases to ourselves we could hear the air whistling in and out of Wingfield’s mouth, rattling in the depths of his throat.

Wingfield slept as they showed us how our weapons worked, and what plants we could browse on if we got lost or ran out of food. Sometimes they caught him and made him stand up; he would smile shyly, like a young girl, and find something to lean against, and back to sleep. He slept while we marched, which other soldiers could do; but other soldiers marched straight when they were supposed to turn and turned when they were supposed to march straight. They marched into trees and ditches and walls, they fell into holes. Wingfield could march around corners while asleep. He could sing the cadence and double-time at port arms without opening his eyes. You had to see it to believe it.

At the end of our training they drove us deep into the woods and set our company against another. To make the numbers even they gave the other side six of our men, Wingfield among them. He did not want to go but they made him. Then they handed out blank ammunition and colored scarves, blue for us and red for them.

The presence of these two colors made the woods dangerous. We tiptoed from bush to bush, crawled on our stomachs through brown needles under the stunted pines. The bark of the trees was sweating amber resin but you couldn’t stop and stare. If you dawdled and daydreamed you would be taken in ambush. When soldiers with red scarves walked by we hid and shot them from behind and sent them to the parking lot, which was no longer a parking lot but the land of the dead.

A wind sprang up, bending and shaking the trees: their shadows lunged at us. Then darkness fell over the woods. sudden as a trap closing. Here and there we saw a stab of flame and heard a shot, but soon this scattered firing fell away. We pitched tents and posted guards; sat in silence and ate food from cans, cold. Our heartbeats echoed in our helmets.

Parker threw rocks. We heard them thumping the earth, breaking brittle branches as they fell. Someone yelled at him to stop, and Parker pointed where the shout came from.

Then we blackened our faces and taped our jingling dog tags, readied ourselves to raid. We slipped into darkness as though we belonged there, like shadows. Gnats swarmed, mosquitos stung us but we did not slap; we were that stealthy. We went on until we saw, not far ahead, a fire. A fire! The fools had made a fire! Parker put his hand over his mouth and shook his head from side to side, signifying laughter. The rest of us did the same.

We only had to find the guards to take the camp by surprise. I found one right away, mumbling and exclaiming in his sleep, his rifle propped against a tree. It was Wingfield. With hatred and contempt and joy I took him from behind, and as I drew it across his throat I was wishing that my finger was a knife. Twisting in my arms, he looked into my black face and said, “Oh my God,” as though I was no imposter but Death himself.

Then we stormed the camp, firing into the figures lumped in sleeping bags, firing into the tents and into the shocked white faces at the tent flaps. It was exactly the same thing that happened to us a year and three months later as we slept beside a canal in the Mekong Delta, a few kilometers from Ben Tre.

We were sent home on leave when our training ended, and when we regrouped, several of us were missing, sick or AWOL or sent overseas to fill the ranks of units picked clean in the latest fighting. Wingfield was among them. I never saw him again and I never expected to. From now on his nights would be filled with shadows like me, and against such enemies what chance did Wingfield have?

Parker got malaria two weeks before the canal attack, and was still in the hospital when it happened. When he got out they sent him to another unit. He wrote letters to me but I never answered them. They were full of messages for people who weren’t alive any more, and I thought it would be a good thing if he never knew this. Then he would lose only one friend instead of twenty-six. At last the letters stopped and I did not hear from him again for nine years, when he knocked on my door one evening just after I’d come home from work.

He had written my parents, he explained, and they had told him where I was living. He said that he and his wife and daughter were just passing through on their way to Canada, but I knew better. There were other ways to go than this and travelers always took them. He wanted an accounting.

Parker’s daughter played with my dogs and his wife cooked steaks in the barbecue pit while we drank beer and talked and looked each other over. He was still cheerful, but in a softer, slower way, like a jovial uncle of the boy he’d been. After we ate we lay on the blanket until the bugs got to our ankles and the child began to whine. Parker’s wife carried the dishes into the house and washed them while we settled on the steps. The light from the kitchen window laid a garish patch upon the lawn. Things crawled toward it under the grass. Parker asked the question he’d come to ask and then sat back and waited while I spoke name after name into the night. When I finished he said, “Is that all? What about Washington?”

“You’re sure about that?”

“You ought to get married,” Parker said, standing up. “You take yourself too seriously. What the hell, right?”

Parker’s daughter was lying on the living-room floor next to my golden retriever, who growled softly in his sleep as Parker lifted the girl and slung her over his shoulder. His wife took my arm and leaned against me as we walked out to the car. “I feel so comfortable with you,” she said. “You remind me of my grandfather.”

“By the way,” Parker said, “do you remember Wingfield?”

“He was with that first bunch that got sent over,” I said. “I don’t think he made it back.”

“Who told you that?”

“You’re wrong. I saw him.” Parker shifted the girl to his other shoulder. “That’s what I was going to tell you. I was in Charlotte sir months ago and I saw him in the train station, sitting on a bench.”

“He didn’t say anything. I was in a hurry and he looked so peaceful I just couldn’t bring myself to wake him up.”

“But it was definitely him?”

“It was Wingfield all right. He had his mouth open.”

I waved at their car until it made the turn at the end of the street. Then I rummaged through the garbage and filled the dogs’ bowls with the bones and gristle Parker’s wife had thrown away. As l inspected the dishes she had washed the thought came to me that this was a fussy kind of thing for a young man to do.

I opened a bottle of wine and went outside. The coals in the cooking pit hissed and flushed as the wind played over them, pulling away the smoke in tight spirals. I sensed the wings of the bats above me, wheeling in the darkness. Like a soldier on leave, like a boy who knows nothing at all, like a careless and go-to-hell fellow I drank to them. Then I drank to the crickets and locusts and cicadas who purred so loudly that the earth itself seemed to be snoring, I drank to the snoring earth, to the closed eye of the moon, to the trees that nodded and sighed; until, already dreaming, I fell back upon the blanket.

Tobias Jonathan Ansell Wolff is an American short story writer, memoirist, novelist, and teacher of creative writing. He is known for his memoirs, particularly This Boy’s Life and In Pharaoh’s Army.